“It feels special knowing our work is supporting people”: Sophie on her Costa Rica Expedition

Sophie, 23, shares what she learnt through her 10-week Expedition in Costa Rica how volunteering changed her perspectives.

Sophie, a 23-year-old graphic designer from Newcastle, is currently on a 10-week Expedition in Costa Rica. She joined through the Expedition Bursary Fund. Here, she shares why she wanted to volunteer in Costa Rica and how her Expedition has changed her perspectives. It’s important to me to actively support issues that I care about. When I was studying, I thought a lot about travelling and gaining wider volunteering experience. I researched different organisations but found it hard to find ethical volunteering programmes. Then I came across Raleigh International, and I was really impressed that all the work is done in partnership with local communities, supporting with their aims rather than dictating what to do. I wanted to steer clear of any aspect of white saviorism. Raleigh Expedition in Costa Rica sounded such a good programme with three distinct phases: Environmental, community, and a 250km trek.

In my first phase I was working on an environmental project in Ricon de la Vieja National Park, which spans 34,000 acres.

Some of the park has been closed due to COVID-19, so we supported the rangers to make park trails more accessible. We did this by raking paths, cutting in steps, and creating new signs. It’s a beautiful place – we saw hot springs, waterfalls, and boiling mud pots, as well as monkeys and toucans. I’m now in my second phase, living and working to build educational centres in an indigenous elementary school in the Alto Chirripó region. It feels special being here, knowing that what you’re doing is supporting the people that you see each day.

It has around 100 students that range from age 12 upwards. We’re continuing the work from the last group of volunteers that were here building a computer sciences room and a library to improve access to education. It’s so easy to take these things for granted at home, like just going into a library and borrowing a book, but it’s very different here.

You think not having things like WiFi or TV will bug you, but it makes you really appreciate what you have and the people you care about.

During Expedition, we have active global citizen lessons where the whole group takes part in discussing environmental issues such as the impact of climate change, ecotourism, and whether we should eradicate mosquitos. It’s great to have structured conversations that involve all of the group.

I’ve met people from a range of different countries and backgrounds here. There are volunteers from Costa Rica, Nicaragua, the Netherlands, Belgium, France, and Scotland.

So, it’s not about just being in an amazing place, but also the people you spend time with, that make it very special. Being in Costa Rica with Raleigh has really given me the bug and I’d love to do more volunteering abroad. I’m passionate about the Raleigh Bursary Fund, as there is no way that I could be here without it.

I was so happy to find out about the bursary. I would never have thought to do this when I was 18, because of the expense, and I really hope that young people who see this case study will be encouraged to apply for the bursary if they are worried about money.

In Costa Rica, there is a significant difference between the importance of protecting the environment compared to the UK.

Costa Rica has so many environmental achievements, such as reversing deforestation, using renewable energy, and protecting the national parks and reserves. There’s a lot we can learn. Since first finding out about the impact of global warming, I’ve wanted to do more to help. I’ve been vegetarian for seven years because of environmental issues and animal welfare, and I became vegan after doing Veganuary. Although we might not see it in the UK so much, there’s a lot of natural disasters across the globe which are becoming more frequent and impacting people who don’t have the choice about where they live or what they eat. So because I can afford to have a choice, I make little sacrifices to know that I’m doing my bit for the environment and for people across the world. If I had one message to people thinking about applying for a Raleigh expedition, I would say: ‘Just do it.’

The process can be overwhelming, but it’s such a unique experience. You’re going to be doing things that nobody else gets the chance to. Living and working in remote, indigenous communities is such a privilege. I feel so present and so immersed in what I’m doing. When you live in a UK city, it can sometimes be hard to have a real appreciation of some of the issues going on around the world. There’s a lot that you can learn from being somewhere and being more connected to the world, which is why I believe that people can really benefit from volunteering on environmental projects.

If I had to sum up my experience in three words, I would say ‘hard’, ‘enlightening’, ‘rollercoaster’.

Because the emotions that I’ve felt since arriving have been up and down, but that’s what makes the experience so rich – pushing yourself outside of your comfort zone and experiencing new places, people, work, and perspectives. 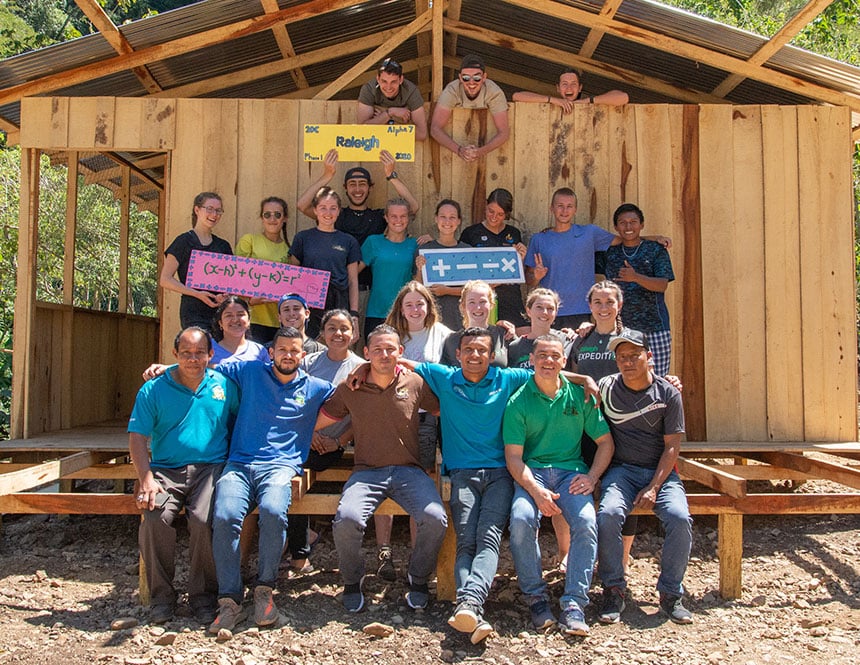 Volunteer on a summer of action in Costa Rica
Join Raleigh Expedition
Work with innovative young people of Costa Rica, one of the most biodiverse countries in the world, to preserve its natural resources. You will improve access to national parks and will work with local indigenous communities to improve access to education for some of Costa Rica’s most marginalised children. You will also build your skills on the adventure leadership trek. Challenge yourself on trek and help lead your team through a variety of stunning routes that tourists don’t get access to.
Find out more about Raleigh Expedition Costa Rica
Climate and ConservationStoriesYouth Voices